These motorcycles, also known as all-terrain vehicles or ATVs, have four low-pressure or non-pneumatic tires, a seat designed, so the operator sits on them, and handlebars for steering.” They are also known as 4x4s, quads, or four-wheelers.

Several well-known manufacturers of ATVs, including Honda, Polaris, and Yamaha. These three brands offer both youth and adult models and an array of models and price points to meet the needs of a wide range of customers. Honda has the best reputation, however.

We have created the infographic below that covers the 5 most reliable off-road 4×4 ATVs. (You are welcome to use and share but please credit us if you do so.)

The Fourtrax Recon is one of Honda’s four-wheelers’ most affordable and practical models. It features a 229cc four-stroke single-cylinder engine, a five-speed manual transmission, reverse, and an automatic clutch.

The front suspension is controlled by a double-wishbone suspension, while a swing arm controls the rear suspension. Each wheel is equipped with drum brakes.

It is not the most high-tech motor, especially coming from a company like Honda, but what it lacks in a flash, it more than makes up for durability.

First, Auto makes sense because it does all the work and thinking for you, including deciding what gear you should be in; all you have to do is push the throttle, but the other option isn’t manual. It’s called ESP, which stands for electronic shift program, translating into electronic thumb shifting for short right upfront.

This is where the excellent torque of this 500 motor makes riding. The Rubicon in ESP mode is even better. Is it versatile even with multiple modes? No, but it’s not terrible, especially when used in its element, which is for more mellow riding suspension-wise.

The Forman Rubicon is among the best riding ATVs Honda has ever built do LRM style suspension upfront, and our bag provides 7.3 and 8.5 inches of travel and 9.4 inches of ground clearance. The front end rides quite smooth and seems to soak up pretty much anything. You can throw at it.

In my opinion, the rear end is pretty stiff, and with the compression settings and lighter springs outback, it would be a huge improvement. The deluxe version of the Forman Rubicon comes standard with EPS and is well-calibrated. 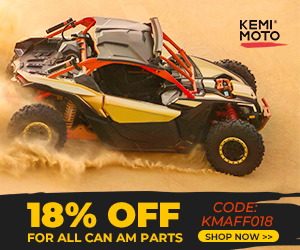 Although the steering does not feel sensitive at rail speeds, it is light and free of feedback, even in a 4×4 vehicle. All Rubicon models include deluxe features such as a DCT and an EPS, beautifully painted plastics, and red accented suspension bits and pieces stored under the rear rack and inside the left front fender.

The handlebars are fitted with a small gauge hidden within what appears to be a large headlight pod, and I must admit that switching gears are somewhat cumbersome. The headlight switches should be moved to the headlight pod so that the left switch cluster can be significantly reduced. Finally, the former should be understood.

Having a low-powered motor and not including any of the other large extras that the others do, the Rubicon 500’s price is incredibly high in its class. Honda’s legendary durability and reliability make it an especially attractive choice to balance the value factor. We can assure you that Honda’s reputation is well earned and well deserved.

ATV Rider describes this as a simple, air-cooled quad. There is nothing better than a Honda 400EX for tackling trails. Their popularity has caused many of them to be available on the used market. Honda 400s changed many aspects of the motorcycle world. It was the first sport ATV in a decade.

Honda recently announced its 2015 line, with the 400X being one of the longstanding sports quads on the market. It has what kind of horsepower?

According to the manufacturer, a stock 400ex produces about 25-28 horsepower. After 6,500 rpm, it stops producing power. The 5.5G tank holds 5.5 gallons (20.9 litres) of fuel for off-road adventures and extended trips.

With high reliability and an agile handle, this is a good used ATV. The ATV is an excellent choice for buyers looking for a bargain on a used ATV. You can often find them at an affordable price.

If you buy any Honda ATV, you can ensure that it will perform at the highest level. Honda is knowng for delivering reliability and excellent performance. Honda ATVs are equipped with steel gears instead of the usual belts found in other ATVs and a bomb-proof transmission. It is easy to ride Honda ATVs even if you are a beginner.

Polaris offers ATVs and UTVs for recreation, utility, and sport with separate brands for different categories.

Starting at $6,999, the Polaris Sportsman 570 is a redesigned model for the 2021 model year. The 567cc, 44 horsepower liquid-cooled engine comes with the price. Additionally, it is equipped with a fuel tank of 4.5 gallons and a payload capacity of 485 pounds.

The Sportsman 570’s brakes include a single-lever three-wheel hydraulic disc brake and a rear foot brake, while its parking brake is a park-in-transmission lever with a lock. Several optional packages and features are also available with Polaris’ Ultimate Trail and Utility HD editions.

Yamaha Kodiak 450 isn’t a big bore 4×4, but it’s a great option for anyone who doesn’t require such performance. I highly recommend this ATV if you want a reliable vehicle that can get you from A to B. The ATV Rider writes that the Yamaha Kodiak 450 is “an excellent choice for hunters traversing tight trails.”

They had a low price range before that. Grizzly’s budget was cut after row three, but Kodiak was continued.

Although the engines are similar, the only difference is this is a 401 CC unit, while the Grizzly 450s have a 421, so you can see that this particular bike is in good condition.

As the tires are naked, I know for a fact that these are real – it’s been a fair amount of work considering the age. Dunlop tires are the original tires, as shown by the date code on the other one. The other tire has a week number of 14 or 2001, so they might be originals.

This causes the brush to pass through the guard and over the frame, hitting the rubber boots, making the ties better. I assume the wheel bearings on this side have been replaced since the ball joints are still present.

Since they still have the original markings on them, they are from week twenty nineteen fifteen, making them much more like the originals.
There’s no problem with that; I have one myself. There is a broken ball joint on this axle side, but someone replaced the CV axle down there.

I probably could have sprayed those old CV boots up a bit better to make them more suitable for securing with clamps since they would be attached with cable ties. Since they were so old, there wasn’t much surface rust.

Despite the broken bushing, the rest of them are in good shape. That’s what I’m interested in. I don’t have to worry about rot since these racks were powder-coated by previous owners.

How Fast Does a 125cc ATV Go?
How to Read ATV Tire Size? The Complete Guide

Thankfully, the values of used ATVs have remained fairly consistent over the years! The depreciation rate of a four-wheeler is slower than most, making ATVs and UTVs an ideal investment at any time.

What is the top ATV brand?

Honda, Polaris, Can-Am, and Yamaha are among the major, most-known manufacturers of There are many models and prices available from these brands points.

No ATV manufacturer can compete with Polaris. People like different things, but Polaris makes good ATVs. The same applies to other vehicles, cars, trucks, etc. There are bound to be some problems with every brand, but that doesn’t mean they’re all junk.

What company makes ATVs that last the longest?

In terms of reliability, Honda ATVs are the best. Honda has led the way for many years. Honda invented ATVs. Circa 1970, Honda produced the most popular 3-wheeler, the Honda ATV. Honda is still the most popular ATV brand, even though many manufacturers.

How Much Should A Teenager Weigh?

Whether you’re a teenager or an adult, there’s an ATV for you. But choosing a reliable ATV isn’t an easy task. Parents tend to purchase ATVs they would not enjoy riding.

Teenagers who want to get into ATVs should consider Honda 300ex, Yamaha Raptor 350, Honda TRX90, Yamaha Grizzly 90, and Polaris Ranger 150. Teenagers should only ride ATVs between 70cc and 90cc.

Here are the likely causes of your ATV not starting:

What Should I Do If My ATV Doesn't Start?

ATVs are damaged by what?

Is it because ATVs are so expensive?

How big should an ATV be for adults?

Adults up to 5’10” should be fine with a smaller ATV (around 400cc) unless special requirements. We suggest 500cc and larger engines for riders who are taller. If you want to ride comfortably, you need a machine that’s right for your height.

What is causing ATVs to sell out so quickly?

As so many companies are trying to start production at once, the demand for plastic has skyrocketed. Consequently, the automotive industry, including the manufacturers of side-by-sides and ATVs, is being hit hard.

How much does it cost to maintain an ATV?

General tune-ups can cost anywhere from $100 to $400 and include changing the oil, changing the spark plugs, flushing the braking and cooling systems, etc. Professionals, however, typically charge $80-100/hour for labour alone.

What company makes the longest-lasting ATVs?

Honda makes the most reliable ATVs. Honda has been on top for many years. The company is one of the industry’s pioneers. Honda produced the most popular 3-wheeled scooter, the Honda ATV Circa 1970.

What is An ATV (All-Terrain Vehicle)? All You Need to Know – Offroadhandbook

[…] you are looking to get the best reliable 4×4 ATV to kickstart your off-road adventure, check this guide for detailed […]

Surya
This is Surya, owner of the Off-Road Handbook. I have been off-roading for years across several terrains in India. I would like to share my knowledge and experience of off-roading via this platform. Let's crave off-roading together with the most unbiased and unique information.